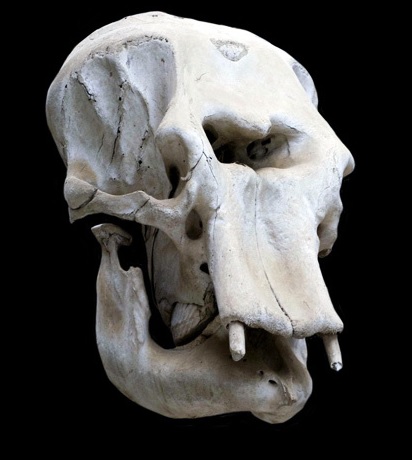 The large hole in the center is actually the nasal cavity for the trunk, but it also resembles a single eye socket.

“The Bottle Imp” is a short story about an imp in a bottle that grants its owner wishes. The catch is that the object is cursed, and if someone dies with it in their possession they will go straight to hell. The second catch is that the bottle cannot be given away, but must be sold at a loss.

In the story, a man buys the bottle for fifty dollars and then sells it after his wishes are granted. However, he later contracts leprosy and must find the bottle again to cure himself. He finally tracks down the bottle, but by this time it has gone through many owners and now the price is only one cent. The man buys the bottle, knowing he will be unable to sell it for less than a cent and so will be stuck with the curse.

The story goes further, but it presents a paradox: if no one is willing to buy the bottle for one cent because they will be unable to sell it, then no one would be willing to buy it for two cents, for the same reason. Therefore no one would buy it for three, four, five, six cents, or any price and the events of the story would be unable to happen.

Link to the short story (PDF).

Theme by Anders Noren — Up ↑